Import from DV or HDV camera

To prepare for importing digital video, switch on your DV or HDV device in play mode and select it in the Import From panel of the Import Wizard.

You will also need to make sure that your destination folder, compression presets, and other options are set up in the other panels the way you want them.

The video currently playing on the source device should now be visible in the preview area at the central area of the display. Along the right edge of the video preview is a scale showing the moment-by-moment audio level. Above that scale, by the top right corner of the preview frame, is a small button that switches to full-screen previewing. 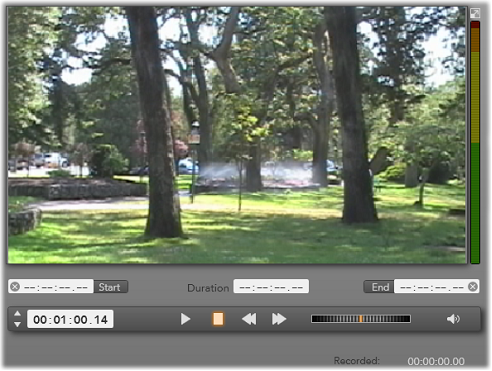 When a DV or HDV source is selected, the central area of the Import Wizard provides controls for previewing and importing the taped material.

Below the preview image is a row of controls for automating capture by setting mark-in and mark-out points. See Recording video and audio for more information.

Another row of controls, the transport bar, serves as your navigation console for the source device.

The transport bar for DV and HDV import, with (from left) jog controls and timecode readout, transport buttons, a shuttle control, and an audio button with a pop-out slider for controlling the preview volume.

The current timecode indicator shows your playback position according to the timecode recorded onto the tape when it was shot. The four fields represent hours, minutes, seconds and frames respectively. To the left of the indicator is a pair of arrow buttons; use these to jog the position one frame back or frame forward at a time.

From left to right, the transport buttons are play/pause, stop, rewind and fast forward. These buttons relay commands to your camera. Using them is equivalent to using the camera’s onboard controls, but typically more convenient.

Drag the orange needle on the shuttle control to the left or right to change the playback position in the reverse and forward directions respectively. The motor speed increases as you drag the needle further off center. When you release the needle, it homes to the center position and pauses playback.

import dv – audio button.png" align="right" hspace="12">Set preview volume: To set the playback volume for previewing, hover the mouse pointer in the area of the audio/mute button in the bottom bar of the media file browser. A volume slider will appear beside the button. Drag the knob up and down to control the volume. Click the audio/mute button itself to toggle audio muting.

·    Mark-In/Out: Mark In and Mark Out indicate the planned starting point and ending point of a video capture.

Note: DV and HDV sources are also suitable for snapshots.

The Import Wizard supports two approaches to selecting a range of video to be imported.

In the manual approach, you simply watch the preview playback and press Start Capture at the start of the desired footage.  When you reach the end of the segment, press Stop Capture. If you have continuous timecode on the source footage, and have set Stop at tape end to “Yes” in the Mode panel, you can walk away and leave the Import Wizard to switch off when the input is exhausted.

The automatic method of capture is good for setting the endpoints of your capture (the “mark-in” and “mark-out”) points with single-frame precision, and for unattended importing that should halt before the end of the recorded material.

Sometimes you may want to use set the mark-in time and leave mark-out blank. When you click Start Capture the Import Wizard will locate your start time then capture until you tell it to stop (or at tape end).

Note: Before starting the import operation, verify that the settings on the Import To and other panels have been configured correctly.

To capture manually with the Start Capture and Stop Capture buttons:

1.    Make sure that the mark-in and mark-out points are not set. If needed, use the  button associated with the field to clear it with one click.

2.    Manually start playback of the source tape before the desired starting point of the capture.

3.    Click the Start Capture button when the starting point is reached.

4.    At the end of the segment click the button again. The captured material is stored in the Album.

5.    Manually halt playback (unless automatic shutoff is in effect as noted above).

To capture automatically by setting mark-in and mark-out points:

1.    Use the time counter controls to set the mark-in and mark out values – the start and end points of the desired footage.

To set the mark-in point, either enter a value directly into the start field, or navigate to the desired point and click the Start button. A similar approach can be used to set the mark-out point.

3.    When the mark-out point is reached, import is terminated and the source device is stopped.

4.    The captured material is stored in the Album.

Import from DV or HDV camera