The Stop Motion function of the Import Wizard allows you to create animated films by stitching together individual frames grabbed from a live video source, such as an analog video camera or webcam. The result of your Stop Motion import will be either a movie at 8 or 12 frames per second, the collection of still images you grabbed, or both, depending on your Mode panel settings. 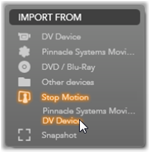 To prepare for Stop Motion import, make sure the source device is switched on, then select it by name under the Stop Motion heading in the Import From panel of the Import Wizard.

Before starting the capture, make sure that your destination folder, options and file name are set up in the other panels the way you want them.

When you are ready to capture an image, click the Capture Frame button. A thumbnail of the grabbed frame is added to the Image Tray at the bottom of the window.

Since this is a stop motion sequence, after each image is grabbed you will generally make small changes to the scene you are shooting in order to create the illusion of motion from frame to frame.

To make your task of visualization easier, the Stop Motion preview includes an “onion skin” effect, whereby successive frames are shown simultaneously in translucent layers so that the differences can be clearly seen. This feature can be configured on the control bar.

This bar provides transport and other functions for Stop Motion import.

From left to right:

·    Live and File indicators: These let you switch between previewing the live video feed and previewing the captured frames in the Image Tray. You can review – and if necessary replace – particular frames without having to undo other work.

·    Counter: This readout shows your current position within the animation in hour, minutes, seconds and frames. The counter value depends on the number of frames you have grabbed and the animation speed in frames per second. The up and down arrow
buttons to the left of the counter provide single stepping when previewing your animation.

·    Navigation buttons: These buttons are for previewing your animation. A loop button lets you cycle the animation continuously for easy checking.

·    Frame rate: This rate, in frames per second, determines how many frames you will have to create in order to amass one second of movie time. This rate influences the apparent speed of the animation.

·    Onion skin settings: Click the more button  to open a small window where the onion skin feature can be configured. The first slider shows the difference in transparency between successive frames, while the second controls the number of frames, in addition to the current one, that will take part in the effect. Experiment with both settings until you find the levels that work best for your movie.

When you have added all the frames you want to the animation, click the Start Import button. The Import Wizard adds your animated movie, and/or the individual frames you captured, to the appropriate sections of the Studio Album.