When movies are designed for the DVD, Blu-ray Disc, VCD or S-VCD disc formats, video becomes an interactive medium, with new possibilities for both videographer and audience.

Developing – “authoring” – a disc in one of these formats means going beyond the old idea of creating a movie to be viewed in strict sequence from beginning to end. Now the audience can decide which parts of the movie to view, and in what order.

The essential new feature that makes disc authoring possible is the menu. A particular disc may have one, a few or many menus, each consisting of a still image or short video sequence. Areas within the menus, called buttons, can be selected by the viewer to activate links to other content on the disc. Activating a link causes an immediate transfer to any of:

·    A normal video sequence, which in this context is called a “chapter”. Chapter buttons often show a thumbnail frame from the video to which they link.

·    Another page of the same menu. Multiple pages, with the same page design but different chapter buttons, are used when a menu has too many buttons to fit on a single page.

Unlike any other kind of clip, menus automatically loop. When the end of a menu clip is reached during disc preview or playback, it is immediately restarted. This produces a jump in the playback position affecting all clips that run simultaneously with the menu, regardless of type – video (if the menu is an overlay), audio or still image. 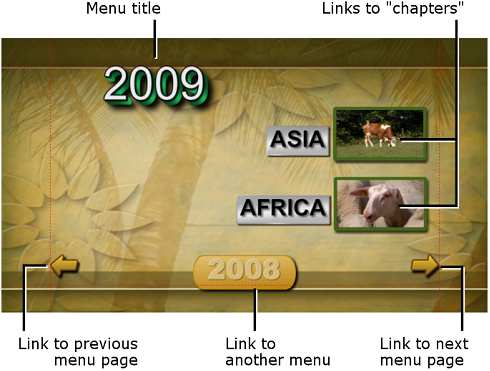 The following diagram is patterned after the Movie Window storyboard. It shows how the menu pictured above, which appears in the diagram as M1, might fit into the overall scheme of a simple movie with two menus.

Each menu is followed in the movie by several chapters, all but one consisting of a single clip. Our menu, M1, has links to five chapters. Our menu is designed to display two chapter links per page, so three pages are required to accommodate all the links. (The second page is the one appearing in the illustration.) We’ve also given each page a link to the M2 menu.

The simple layout of this short movie can easily be extended to organize large numbers of clips. Much more complex movies are also constructed from the same elements: multi-page menus with links to chapters and to other menus.

Availability: Discs with multiple menus are supported in Studio Ultimate only.

ð Using menus from the Album

ð Editing menus on the Timeline