The Volume and balance tool

Compared to adjusting audio on the Timeline, the Volume and balance tool offers a greater degree of adjustment functionality organized into one convenient location. It also provides both left-right and surround-sound balance controls. The tool operates in a similar way to a traditional audio mixer.

Availability: Surround sound playback is supported in Studio Ultimate only.

The Volume and balance tool provides individual level controls for each of the audio tracks: original audio (left in illustration), overlay audio, sound effect and voice-over, and background music (right). The overlay audio controls are displayed only when the overlay video and audio tracks are open in the Movie Window.

The balance control, located in the right-hand part of the tool, can position the audio of any clip – or part of one – in stereo (one-dimensional) or either of two surround (two-dimensional) modes. The mode is selected in the dropdown list above the control.

Each audio track has its own set of level controls. The set for the original audio track is shown at left.

The individual controls and displays include a track mute button Œ. When this button is in its down position, no audio clips from the track will be used in your movie. The track mute button’s icon has a second purpose: it identifies which track the level controls apply to. This is the only visible point of difference amongst the three sets of controls (four if the overlay track is visible) .

The track level knob  raises or lowers the overall volume for the track. It therefore affects the vertical position of the volume adjustment lines on all clips on the track, but does not change their contour. Click on the knob and drag it with a clockwise rotation (up to the 2 o’clock maximum position) to increase the volume. Use a counterclockwise rotation (down to the 6 o’clock minimum) to lower the volume.

A sliding knob, the track fader Ž, sets the current track level on a relative level scale , which is calibrated in decibels (dB). The 0 dB mark corresponds to the level at which the clip was recorded. The current level is displayed numerically in a separate readout .

The position of the fader knob shows the volume level at the current playback position in your movie, relative to the original level. Drag the knob up or down to modify the level. The knob is “grayed” (disabled) if there is no clip on the track at the current time index. If the track is muted, the knob is grayed and set to the bottom of its range. Adjusting the fader results in a volume adjustment handle being added to the track as described under Adjusting audio on the Timeline.

A track’s playback volume contour, or envelope, combines the overall track level with the relative level at each point on the track. This combined level, which is shown graphically by the volume adjustment lines on audio clips, is applied to the actual audio data to produce the track’s output level, as represented on the level meter ‘, which illuminates during playback to show the level at the current time index.

The meter scale to the right of the level meter displays the output level. The unit is again dB, but on this scale 0 dB corresponds to the maximum digital sample value. If the track volume reaches or exceeds this value, the output will be marred by audio “clipping” – the unpleasant sound produced by attempting to set volume levels outside the range of a digital signal. To avert this, adjust the fader such that the output level in the loudest parts of the track hovers around -6 dB to -3dB. As a visual monitoring aid, the color of the level scale changes from green to yellow to orange as the output level – and thus the danger of clipping – increases. Avoid letting the level stray above the yellow region. If clipping occurs, a red zone at the very top of the scale, the clipping indicator ’, lights and briefly remains lit to alert you that clipping has taken place.

The fade buttons “ produce a fade-in from or a fade-out to the current position of the movie. For a visual confirmation of their effect, watch the behavior of the clip’s volume adjustment line when the fade buttons are clicked. The fade duration is variable from zero to fifty-nine seconds. Adjust it in the Project preferences options panel (Setup Ø Project Preferences) under Volume fades. Fades are not available too close to the beginning or end of a clip.

This control has three modes, stereo, surround and dialog, which you select from the dropdown list above the control. The mode can be changed whenever desired – even within an individual audio clip.

Availability: Surround sound
is supported in Studio Ultimate only.

In any mode, the position of each track at each point in the movie is shown by its speaker icon, or “puck”. The icon matches the one on the muting indicator for the corresponding track.

In stereo mode, you set the position of the track by dragging its puck left and right between a pair of main speakers:

Positioning the original audio in the middle of a stereo mix with the sound effects track (L) and the overlay track (R) on opposite sides. In this example the music track icon (right of center) is “ghosted”, indicating either that the track has been muted or that there is no clip on the track at this time index.

In surround mode, you can position each track from front to back (“fade”) as well as from left to right (“balance”). Each track can be independently placed anywhere within the rectangular listening area defined by the four corner speakers.

Dialog mode is similar in concept, but includes the center speaker at the front of the listening area. Sending a portion of a clip’s audio through the center helps stabilize the apparent location of the sound within the shifting surround mix. At the same time, the placement of the sound source can be freely varied in two dimensions as with the standard surround mode. 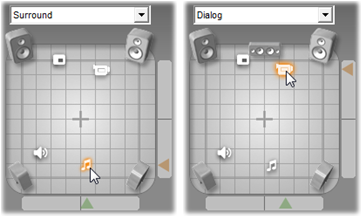 Surround and Dialog modes: At left, the music track, in Surround Mode, is positioned at the rear of the listening field. The original audio track at the same time index is in Dialog Mode, shown at right. The Dialog mode focuses the original audio by including the center speaker in the mix.

There are two ways to set the position of a track’s icon in the balance control. Either click on any track’s icon and drag it to the desired position, or move it by dragging the triangular locator knobs below and to the right of the control. The locator knob below the balance control adjusts the left-right positioning of the audio output from the currently-selected clip, while the knob on the right adjusts the front-back positioning.

Each audio clip in your project displays a contour line showing one of its volume, left-right balance or front-back balance. To select which of the three types of line is displayed, use the commands on an audio clip’s right-button context menu (see Anatomy of an audio clip).

The contour lines can be modified directly on the Timeline using adjustment handles.

The Volume and balance tool