When you begin working with the Project Bin, you will notice a strong family resemblance between it and the Album. The essential differences between the two are the scope and source of their collections. Whereas the Album is a central library of available resources, the Bin contains only those items that either already belong to the current project or that you have specifically earmarked for possible inclusion. It therefore does not need or have the Album’s system of source folders and file navigation. However, it is still possible to introduce material from the file system directly into the Bin by drag-and-drop, as described below.

An empty Bin is automatically created for each project, and its contents are loaded and saved along with the project thereafter. To open the Bin and inspect its contents, click the folder button near the left end of the Movie Window title bar, or use the Toolbox Ø Show Project Bin menu command.

The folder button to the left of the project name opens the Bin.

While open, the Project Bin appears as a panel in the screen area usually allotted to the Album. A single tab on the left side bears a folder icon identifying the panel as the Bin, while tabs along the top provide access to your project’s resources in four groups:

·    Videos: Like the corresponding section of the Album, this tab can house video files of all kinds, and allows previewing and selecting material in both file and scene views.

·    Photos: Again like the Album section, this tab is for your bitmapped image files, including digital photos and frame grabs.

·    Audio: All types of music and sound files can be stored here.

·    Other: This tab is for miscellaneous resources – classic titles, motion titles, disc menus and Montage® themes. 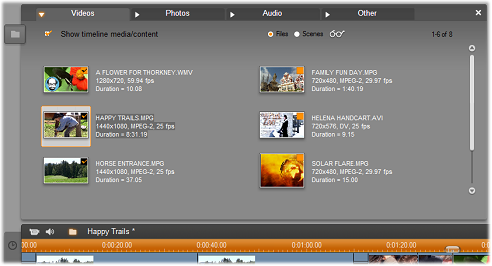 The Videos section of the Project Bin presents an almost identical interface to that of the same section of the Album, lacking only the folder navigation controls. The checkbox at top left, ‘Show timeline media/content’, allows you to temporarily hide items that are already in use by your project.

Adding to the Bin

As noted above, every time you add content items to your project, the items are also added to the Bin for further use. You can also add items directly to the Bin only, leaving for later their possible inclusion in the project. If you like to begin your projects with a “gathering” phase in which you assemble the needed materials prior to editing, the Bin can significantly streamline this task.

When new items are added, they are automatically sorted into the appropriate Bin sections, and will be available the next time the Bin is opened.

The items in the Bin are not new copies of the media files concerned, but simply references to existing files, so you can add as many as you like without worrying about using excessive amounts of storage. If the actual files corresponding to a Bin item is deleted or moved from its location, it will no longer be available in the Bin either.

To add one or more selected items to the Bin, use any of these methods:

·    Drag items from the Album onto the Bin button. A standard drag-and-drop mouse pointer confirms the operation.

·    Drag media items from Windows Explorer and similar applications onto either the Bin button, or the Bin itself if it is open. All media types supported by Studio are allowed, and will be appropriately classified.

·    Select the context menu command Add to Bin or Pin to Bin on any Album item. “Pinning” applies only to items that are already part of your movie project. An item that is “pinned” to the Bin will not be removed from there even if you delete it from the project.

Once an item is in the Bin, you can use the same techniques for adding it to your project as you would from the Album, by dragging the icon to the Movie Window, or right-clicking and selecting Add to project from the context menu.

A symbol in the top-right corner of an Album or Bin icon shows both whether the item is currently used in the project, and whether it has been explicitly added to the Bin. See here details.

Removing from the Bin

As just noted, there is a distinction between items that are added automatically to the Bin only because they are used in your current movie project, and those that you have added explicitly. “Pinned” items are those for which both conditions are true.

To remove an automatically-added item, delete it from the project.

To remove an item not in the project, click the Remove from Project Bin command on the item’s context menu in either the Album or the Bin.

To remove a pinned item, click the Unpin from Project Bin command on the item’s context menu in either the Album or the Bin, and also delete the item from the project.