·    An Enter motion controls the arrival of the layer – its first appearance within the running title.

·    An Emphasis motion maintains audience focus on the content of a layer by giving it an attention-getting action during its time on-screen.

Each layer is allowed to have one motion of each type. All motions are optional, however, and it’s also quite possible to have a motion title with no motions at all.

A quick survey of the motions collection

In each of the three classes of motion, most of the animations can be grouped into several standard types based on their mode of action:

·    Letter-based motions operate at the level of individual letters in a text caption (other layers are treated as consisting of a single “letter”). For instance, in the Enter motion “Letters turn”, the letters in the text layer are first seen edge on, then rotate in place one by one until all are in their normal orientation.

·    Word-based motions work similarly, but with words as the smallest unit of animation. In the Enter motion “Words from bottom”, the words in the layer float up into position one by one from below the frame.

·    Line-based motions are meant for layers with multiple lines of text, each of which is processed in turn. In the Enter motion “Lines from behind”, each line of text is brought onto the screen along a perspective track as though it originated from behind the viewer’s own position.

·    Page-based motions affect the entire layer simultaneously. One example is the Enter motion “Barrel roll”, which “rolls” the layer into position from above as though it were painted on the side of an invisible rolling barrel.

Most Enter motions have a corresponding Exit motion with which they can be paired if visual consistency is desired. For example, a layer that enters with the “Words from infinity” motion could be configured to exit with “Words to infinity”. However, this kind of consistency is only an option, not a requirement, and you can mix and match motions of the three types in any way you choose. 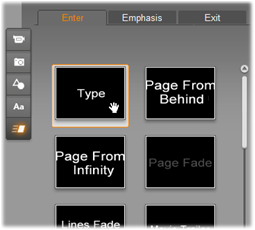 The Motions section of the Motion Titler Album has tabs for Enter, Emphasis and Exit motions. Each layer in a title can use one motion from each class.

·    Double-click the motion icon in the Album.

·    Drag the motion icon from the Album to an accessible layer (one not masked by other layers) in the Edit Window.

·    Drag the motion icon from the Album to the layer in the Layer List.

·    Right-click the motion icon in the Album and choose Add to selected layer(s) from the context menu.

Upon using any of these methods, the motion will be added to the layer, replacing the existing motion of the same type on that layer, if any. At the same time, a looping preview of the title animation will begin to run in the Edit Window so that you can immediately see the effect of the motion on the layer in the context of the overall title. See Working with the Layer List for details on working with motions in the Layer List.