The Objects section of the Motion Titler Album contains bitmapped clip art and decorations for your titles. Except that they are provided as resources with the Motion Titler rather than as files in an image folder, they are used in exactly the same way as the images in the Photos section. 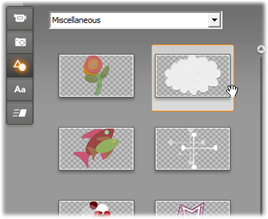 Selecting and dragging an image from the Objects section for use in a motion title. Use the dropdown list at the top of the section to select one of the available image categories.

One use for titles: placing graphical thought or speech balloons over ordinary video.