Picture-in-picture (often abbreviated to “PIP”) – the inclusion of an additional video frame within the main video – is a versatile effect familiar from its use in professional TV productions.

Picture-in-picture with optional border, shadow and rounded corners (left). Split-screen effects, like the vertical split at right, are among the variations that show off the versatility of the PIP tool.

To use picture-in-picture, start in the usual way by dragging some video clips onto the Movie Window Timeline. Drop the clips you want for background video onto the video track. The foreground clip – the PIP clip – goes on the overlay track underneath the main clip.

Note: If you are planning a split-screen effect, like the one shown at right in the illustration above, it doesn’t matter which of the two clips goes on which track.

The Picture-in-picture and Chroma key (PIP/CK) tool is really two tools in one. Because they are used independently, we treat them as separate tools. This illustration shows the PIP side of the tool. Click the Chroma Key tab at the top of the tool to switch.

Most of the left-hand side of the PIP tool is taken up with an interactive layout area where you can both view and modify the dimensions, placement and cropping of the overlay video. The adjustments that you make are reflected in the Player preview as you work.

The layout area has two modes, selected by the Scale and Crop radio buttons.

Scale mode: The gray, checked region in the layout area represents the transparent portion of the overlay frame, through which any underlying video can be seen. In typical PIP usage, this accounts for most of the screen, the overlay being sized small enough that the main video is not unnecessarily obscured. You can modify the PIP frame in three ways:

·    Use the center control points on the edges of the PIP frame to change its dimensions arbitrarily.

·    Use the control points at the corners of the PIP frame to change its size but not its proportions (“aspect ratio”).

Crop mode: In this mode the layout area represents the entire overlay frame, regardless of its actual dimensions as set in Scale mode. The rectangle defined by the control points shows which portion of the frame is visible. Outside the visible area, the frame is semi-transparent, letting the checked pattern show through.

As in Scale mode, the side control points allow for free adjustment of the crop rectangle, whereas the corner control points preserve its aspect ratio.

Presets: Choose a preset name to set up all the PIP controls at once to the predetermined values associated with that name. You can choose a preset as a first approximation to your desired settings, then adjust them manually until you get exactly what you want.

Transparency: Use this slider if you want the underlying video to show through the overlay itself. Moving the slider to the right makes the overlay, with its border and shadow, increasingly transparent.

Border: These controls set the color, width and transparency of the border that will be drawn around the overlay frame. Set the width to zero (slider all the way to the left) if you don’t want a border at all.

The Softness slider controls the amount of blurring on the outside edge of the border. Move the slider left for a hard edge, or right to blend the border with the background video. Check the Rounded corners box if you want to round off the corners of the PIP rectangle.

Shadow: These controls set the color, width, angle and transparency of the drop shadow effect that gives the illusion of the overlay frame floating above the background video. Set the width (using the Distance slider) to zero if you don’t want a shadow to appear.

The dial-shaped shadow-angle control gives you eight choices for the placement of the shadow relative to the frame.

Enable picture-in-picture: This checkbox allows you to turn the PIP effect on and off.

Apply to new clips: This option is handy when you want to set up the same PIP settings for a number of different clips. As long the option is checked, PIP will automatically be applied to each new clip that you drag onto the overlay track, using the same settings that were displayed the last time the tool was open.

If you prefer to enter your PIP parameter settings numerically rather than graphically, you can turn to an alternative interface provided by the
Video effects tool. You can also combine the two methods, using the PIP tool’s graphical interface to specify the initial settings, then fine tuning them with the numerical effect parameters.

The available parameter settings of the Picture-in-picture effect are almost identical to those offered by the PIP tool: 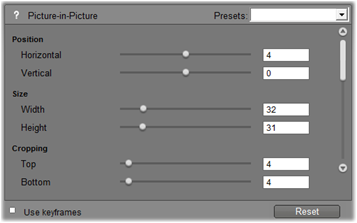 Parameter settings for the Picture-in-picture effect.

Cropping: The four sliders in this group trim away a percentage of the original PIP video frame, allowing you to remove unnecessary portions of the image and focus on the main subject.

Video: The Transparency slider lets the background video show through the PIP overlay to any desired degree.

Border: The parameters in this group are equivalent to the Border settings on the PIP tool, allowing you to set the overlay border’s color, thickness, transparency and edge softness, and to select the rounded corners option if desired. One bonus of the effect interface is that there are separate Width and Height controls to control the border thickness, rather than the single setting provided by the tool.

Shadow: As with the Border group, these parameters are essentially the same as those on the PIP tool, except that the Horizontal offset and Vertical offset parameters afford slightly more flexibility in positioning the shadow than do the tool’s Distance and Angle settings.