The Player displays a preview of your edited movie, or of the item currently selected in the Album.

The standard playback controls are similar to those on a camcorder or VCR. They are used for viewing ordinary video. 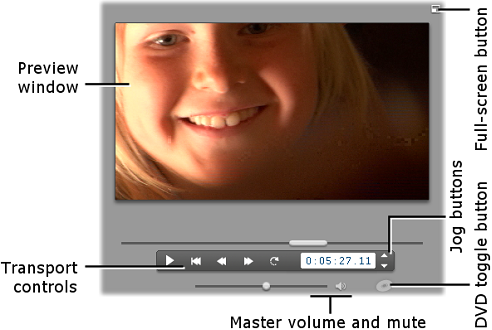 The DVD playback controls emulate the navigation controls on a DVD player or remote control. Use them for previewing your DVD or other disc productions, including menu interaction. 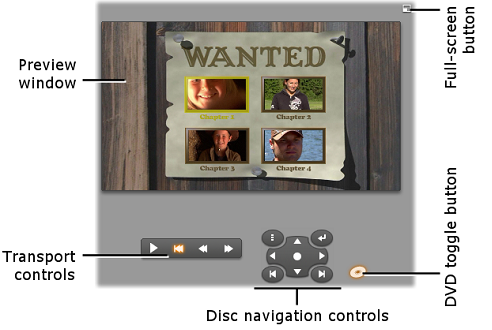 This is a point of focus in Studio because you use it so often, especially for previewing your movie. It can also be used to display:

·    Still images or titles from your movie.

·    Changes to video effects in real time while you adjust the parameter controls for the effects.

·    Still frames from your video.

While viewing a still frame, you can step by as little as a single frame in either direction with the “jog” controls.

If your screen dimensions permit, Studio lets you enlarge the Player – and therefore the video preview – by means of the Player size slider. This control appears above the Player to the left of the Undo button when reorganizing the display is possible.

Drag the control knob rightwards to increase the Player size, or leftwards to decrease it. The leftmost knob position corresponds to the smallest size, which is also the default.

Resizing the Player optimizes your use of screen “real estate” to obtain a larger video preview.

Switch between the two playback modes with the DVD toggle button at the bottom right-hand corner of the Player. This button is only available when your edited movie contains at least one menu.