The video scenes you add to a project need not all originate with the same device or be in the same file format. They need not even have the same frame size, aspect ratio or frame rate.

When video is played back within Studio, however, a common frame format must be used. The Project format box on the Project preferences options panel lets you specify the format for new projects either explicitly (e.g. “NTSC Widescreen”) or implicitly, from the format of the first clip you add to the project.

The current project format is displayed as a tooltip over the project title in the Movie Window. 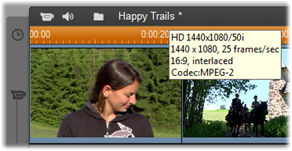 If you want to avoid black bars (“letterboxing”) in your project video, but still want to use scenes shot in the wrong aspect ratio, there are several approaches you can consider:

·    Use the Aspect ratio commands on the Album menu. These let you stretch the Album scenes to conform to the proportions of the project frame, at the cost of some distortion.

·    The Zoom Picture to Full Frame context menu command for clips in the Movie Window expands the central portion of the original image enough to fill the frame in the project format. Proportion is maintained with this method, but some material is lost.

·    For a fine-tuned version of the same approach, use the 2D Editor effect with keyframing to create a “pan and scan” version your video. Studios often use this technique to make their movies fit a standard television screen when they are transferred to videotape or DVD. A portion of each frame is still lost, but you have some control over which portion that is. Careful tracking of the action with the aid of keyframing generally allows you to obtain acceptable results despite this problem.

Availability note: The 2D Editor effect and the keyframing feature are provided in Studio Ultimate only.

Compensating for source video in the “wrong” aspect ratio by adding black bars (L), stretching to the full frame (C), and zooming (R). Each method has its own drawbacks.

The project format is also used as the target format for rendering, which is the process of generating video for footage in which HFX transitions, effects or other computationally demanding features are used. Until such video has been rendered, it may not display smoothly and with full detail during preview.

Studio is able to carry out rendering behind the scenes while you work. This feature is controlled from the Background rendering box on the Video and audio preferences options panel.

Following the dialog’s advice regarding the codec to use for background rendering may help reduce the rendering time when your final movie is output.

If you are planning to preview your video on an external device (Studio Ultimate only), you may need to set the project format and the background rendering codec to match that device. For instance, if you are previewing on an analog monitor plugged into your DV camcorder, you should do your background rendering in DV.